From Vietnam To China Day 4

Good Morning Vietnam! We had pho for breakfast, a traditional Vietnamese rice noodle soup made with a clear broth. We were introduced to pho in Austin, Texas by our son Eduardo – having the authentic recipe here in Hanoi was a real treat!

As soon as we finished breakfast we took a walk to near-by Hoan Kiem Lake. We had so much fun mingling with the local people and taking photos. Many were walking, doing aerobics, reading the paper in the beautiful park, or doing their morning Tai Chi exercises.

Our local friend, Mr. Cuong met us at 8:30 and along with our trusty driver, Mr. Tauong, we set out for a tour of more of the capital city. We got out and walked to the granite and concrete mausoleum of Ho Chi Minh, the Communist leader of North Vietnam.

We watched the hourly changing of the guard. The impressive monument was closed today so there were not the lines of thousands of Vietnamese people and other tourists who wait to pass by his tomb.

Cuong pointed out several other government buildings around the area and we walked through the park considered holy ground by the faithful of Northern Vietnam. We were able to see the Presidential Palace and several of Ho Chi Minh’s homes used during the various stages of his reign of power.

It was already hot and humid as we walked around Bac Ho Lake. We visited the One Pillar Pagoda, built in 1049 by Emperor Ly Thanh Tong to celebrate the birth of his only son.

A brief rest, a Coke, and several bottles of water later, we met Tauong at 10:15. We drove past West Lake where US Navy Pilot John McCain was shot down and captured in 1967. Cuong pointed out the Supreme Court building and right across the street is the Lao Lo Prison, known as the Hanoi Hilton where McCain spent 6 years as a prisoner of war.

We continued our walk around the lake to the Temple of Literature built in 1070. The complex consists of five courtyards dedicated to Confucius and the pursuit of knowledge. The Heavenly Pond reflects light from the heavens onto shrines with the names of the ancients who studied at this university and passed the examinations.

At 11:15 we left the city and drove southeast to the suburbs for a Vietnamese cooking class. The four of us all donned aprons and learned to cook Banh Cuon, a special rice pancake filled with ground pork, mushrooms, onions, nuts, and spices, and Nem Ca, spring rolls with fish.

Our instructor Quyen, was not only patient but also encouraging. As an additional challenge she taught us how to carve cucumbers, carrots, and tomatoes. That skill is definitely harder than it looks!

Of course, the best thing about the cooking class was that we were able to eat all of the good things we made. The second best thing was she gave us copies of each recipe to take home and try.

We thanked our hostess and left about 2:00 to go back into the city and learn more about what we would see in our days in the north with a visit to the Vietnam Museum of Ethnology. Cuong guided us through the Open-Air exhibits showing housing of the diverse ethnic groups of the region.

Cuong gave us independent time to explore the two floors of the main museum. We all agreed we could have spent two days there, but it was getting late and we had to leave to fight the traffic to get back to our hotel.

And fight the traffic we did! Tauong’s intention was to drive home along the narrow but beautiful lake road but traffic was at a stand-still. Miraculously, he turned our mini-bus around against oncoming traffic and blaring horns!

We were hot and tired when we returned at 6:00, but we had had a delightful day full of learning and discoveries! After a shower, we were ready to tackle the photos, write the journal, and pack our bags for more adventures tomorrow.

We expect Tai Chi instruction the moment you get home, especially the ones where you lift your leg about a foot higher than your head. 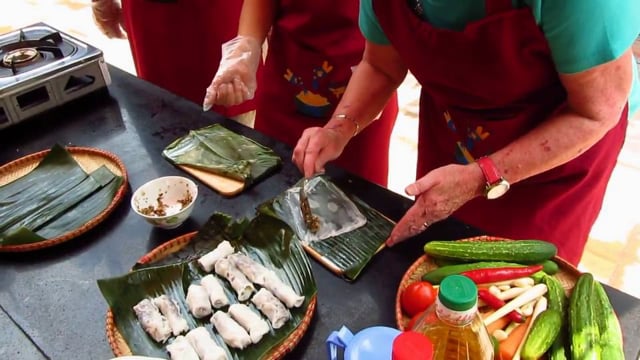