We had a late night so it helped to have a delayed start this morning. Breakfast was very busy with a groups from Brazil and the USA and other individual families. Summer is the time to visit Norway.

Opting for the morning’s city tour, we joined about half of our group at the bus at 8:30. We met our guide Johanna, a native of Bergen, and very proud of her city. Today we were lucky to have “whisperers” an audio transmitter than enabled us to hear our guide as we walked around the city.

She gave us a brief history of the city built by King Olav Kyrre in 1070 AD. Know as the first king who could read and write, Olav founded a city of culture and learning. With a population of 272,000 people, Bergen is the second largest city in Norway.

In 1944 a German munitions vessel exploded in the harbor destroying most of the buildings and killing 120 people and 5000 homes were lost. Most of the buildings close to the waterfront have been restored but others were rebuilt in the 1950’s block and glass style.

We made our first stop at the harbor and Customs House Square and got out of the bus to see the tug boats, a naval vessel, and hundreds of yachts and sailing ships. This weekend Bergen is hosting the Tall Ship Races.

The city is readying the harbor for a celebration of their Constitution and the 100 years of the city’s sailing ship Statsraad Lehmkuhl. Many ships have already arrived, band stands are being built, and kiosk merchants are preparing for the event beginning tomorrow. Traffic into the city will be blocked and rerouted to avoid the congestion.

There were three cruise ships in port today so the streets were full. We drove out of the main city to a beautiful small area to see Troldhaugen, the home of the greatest Norwegian composer, Edvard Grieg.

Although the house was covered with scaffolding because they were repairing the roof, we got a great idea of the life and times of the composer and his wife Nina. We toured the house, walked around the grounds, down to the bermed concert hall, his gravesite, and the museum displaying artifacts from his life.

We finished our tour at 10:10 and met back at the bus where Jan was patiently waiting for us. He drove us back to the old city where we grabbed our backpacks and set off for a walking tour of Bryggen, featured on the UNESCO World Heritage Site.

We began at Bergenhus fortress with a tour of Håkon Hall built by King Håkon Håkonsson in 1261, restored in 1910, and then destroyed in the WW II bombing of 1944. The medieval banquet hall is 100 feet long and the location of important receptions even today.

The tour ended at the museum café with coffee and tea. We thanked Johanna and found our own way back to the city center and old fish market. While we dodged the tourists from the cruise ships, Vic tried to take a few photos of the beautifully restored guild houses from the Hanseatic League in the 13th Century.

Now shops and cafés, these buildings housed merchants who dominated trade for 400 years, controlling import and export into and from Bergen and ports in Germany. Because of the crowds we will come back after 5:00 to be able to get a true feel for this UNESCO site.

As we made our way downtown, we stopped at several of the little stands selling local products of the region. We tried whale, moose, and reindeer sausage – interesting, but not enough to buy a whole thick link!

At 1:00 we returned to the room to avoid the sun and the crowds and started the journal and caught up on our messages. When we heard the “all aboard” whistles of the cruise ships at 5:00, we knew it was safe to go back out on the streets.

When we ventured out, the sausage kiosks were closing, the fish markets were hosing down their stalls, and the city maintenance workers were putting up barricades and getting ready for the incoming tall ships that will come in tomorrow.

We found a great kebab shop that was run by a man from Iraq and the cook was from Turkey. She spoke English very well, a social studies teacher, before the unrest in Turkey. It was motivating to speak with her about her concerns for her homeland that we enjoyed so much.

The row of brightly colored Guild Houses were glowing in the evening sun, perfect for photos and more visible without the thousands of people that were lining the streets this morning.

We came back to the hotel by way of alleys in back of the shops and through the real streets of Bergen. It is always fun to get a behind the scenes view of a busy cruise ship port of call.

By 9:00 we had finished the journal and were ready for bed. Our wake up call is at 5:45 as we have a long drive to Oslo in the morning. 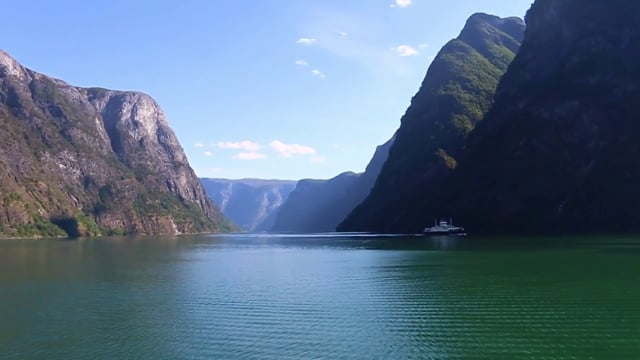 Sognefjord - Longest Fjord in the World