Today was a special day, A Day in the Life, which is a unique program of The Grand Circle Foundation. We met our local contact Biwani Shanker, also called Mr. Tiger, who was our contact for the day.

The first stop was the Bright Future English School, in the village of Khilchipura, India. We met the principal and an English speaking representative of the school. They thanked us for coming and explained the contributions that the Grand Circle Foundation has given to the children of the Under-Kindergarten through Eighth grades.

The first gift was a well for fresh water. In addition desks, computers, and solar panels are planned. The school is a private one, the children's parents pay tuition but scholarships are available.

The school houses 450 students; there are 300 boys and 150 girls. Children come from the surrounding villages as far away as 25 kilometers. They do have a bus that picks up children who do not have transportation or who cannot walk to school.

When we arrived, the children were singing their morning songs. When they went back to their rooms, we visited the classrooms. The teachers were so tolerant of us and they asked us to teach the children songs and ask them about their schoolwork.

The children did not have desks but sat on the floor with their backpacks in front of them to write on. They all wore uniforms but had to leave their shoes all lined up outside the classroom door.

Gennie played with the kindergarten children and taught them a few songs and two finger plays. She also brought her iPad to share a slideshow of our home and two short videos of our grand cat Deckard with a small group of 8th graders.

Others taught songs and dances during the hour we spent with the children. Some of us brought school supplies that are badly needed. When we said goodbye to the teachers we left with mixed feelings about the poverty of the village, but realized the great work the principal and teachers were doing.

We walked through the village and Sujay told us that about 70% of the Indian population live in small villages. We were able to interact with the villagers with Sujay and Mr. Tiger as our translators.

We visited the home of a woman named Parma and she offered us a cup of Chi Tea. She was very willing to show us her two room home and answer questions about her life and her family.

Parma and her husband were officially married when they were 7 and 8 years old but they did not live together until she was 15. The first time she actually saw him was when she was taken from her family for their wedding and to live in her husband's home.

The villages of India are keeping the culture alive. The traditions of extended families, hospitality, and generosity are common and important for economic survival.

Parma's husband is a day laborer and she is now working at a women's coop. We got on our bus and took her to her work at the Daskar "A Hundred Hands" workshop.

Ujwala, one of the founders of the Rathamborne Foundation explained the concept of the cooperative and the benefits the women received. In addition to their earnings, they receive insurance, a pension plan, help with family planning, and general medical care.

The biggest obstacle Ujwala had to overcome was the resistance of the village men to having their wives be independent. As soon as they saw real money and the many financial advantages they warmed to the concept. Now over 350 women work at the center or in their homes doing piecework.

We had lunch at the coop and then began our long ride to Bharatpur. After about 2 hours we stopped at the Tiger Treat roadway oasis for a bathroom break and to stretch our legs.

By 3:45 we were continuing on to Bharatpur. Traffic was heavy with a variety of vehicles including tractors, cars, buses, trucks, tuk-tuks, hundreds of motorcycles and the ever present Holy Cows - organized chaos at its worst.

After almost two hours on a bumpy single lane road we joined the most famous highway, and most ancient business routes in India. We traveled on the Golden Triangle Roadway joining Delhi to Jaipur to Agra.

At 6:00 we had a break at another way stop near the town of Mahua. These stops are required to make sure the driver has a well deserved time away from behind the wheel. We shared a Fanta and bought a few cashew cookies to tide us over for the rest of the ride to our hotel.

At 8:00 we reached our hotel. After an exciting morning with the villagers and a long afternoon on the road, we said good evening to our travel companions and found our room.

Our accommodations were just as plush as in Rathamborne but we were here only for one night. We were able to get the journal written and chose the photos that best represented our day. The Internet was questionable so we decided to delay posting Day 12 until we reached Agra tomorrow.

The Fact of the Day:

What are the subjects being taught? Math, science??? Sounded so exciting.

Fascinating Day in the Life. Bet you, especially Gennie, felt right at home with those adorable children. A question...Gennie mentioned showing the kiddos pictures of your grand cat Deckard. What about Buddha? Have we missed something?

I especially enjoyed hearing about the school and seeing the sewing machines at the coop. 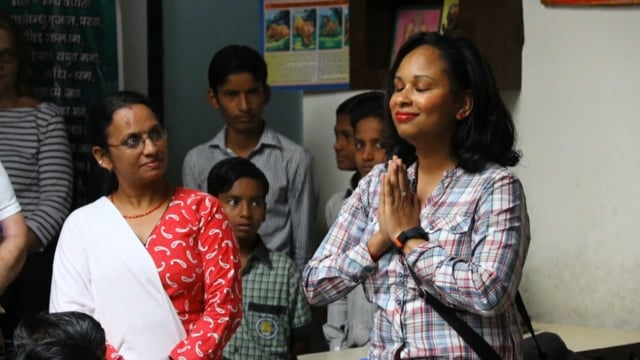