We were up early again; hopefully we will get our body clocks in sync with the sun time soon. We had a light breakfast and then identified our luggage before boarding the bus.

We were scheduled to leave the hotel at 8:00 but the Russian bus was late leaving and holding up the whole departure process. Amazingly, our driver and assistant got all of the luggage loaded in a timely manner and we left the hotel at 8:15.

We made a short stop at an ATM for several people to get cash. What a convenient way to have local currency. We get a small amount every four or five days and then we never have to worry about lots of cash in our possession.

Leaving the big cities behind, our journey this morning took us from Jaipur out into the rural landscape. We had great views of the low Vindhya mountain range. India has both the oldest range in the Vindhya and the youngest in the Himalayas.

The fields along the bumpy road were being harvested. Mustard, mullet, sorghum, are the primary crops in this area. The women work the fields, milk the cows, cook, and care for the children. Most of the men in the rural villages do not work as it is beneath their dignity.

The homes were very simple but each one did have electricity. We made several photo stops and the children came rushing to the bus begging for money. Sujay cautioned us about ever giving the children anything, but over the years they have learned that a big bus means tourists and tourists mean money.

The first town was Lalsot, known for the production and sale of firewood. We stopped to watch a man shearing a camel. Camels are sheared twice a year for their own comfort and to sell the hair.

As the barber shaved Kalu, the camel, the owner calmed him by rubbing his nose. Vic helped with the massage as many of the locals gathered around us laughing at us taking photos and asking questions.

A Jugaar driver allowed us to take a ride through the town in his truck. The engine is a kind of lawnmower, tractor motor, and water pump all combined.

We all climbed into the bed of the truck and waved at the locals as we rode through the town. Their look of surprise and laughter was amazing. Spontaneous experiences like these are truly why we travel with OAT!

Our morning stop was at The Tiger Treat Resort. There were not many places to stop for snacks and restrooms in this part of the world. There were six other buses at this facility so it took a bit longer to get in and out.

As we waited for some of our shoppers, Vic got a weather reading. The temperature was 82 degrees with 42% humidity.

Our serious discussion for the morning was an explanation of the Indian Cast System. There were four legal casts as we listed on a previous day's journal. Mahatma Gandhi tried to break the traditions of the system and it has been illegal for centuries.

The reality is that hideous crimes are still being committed against the lower cast that Gandhi called "Children of God". Sujay told us very sad and disturbing stories of this discrimination of approximately 30% of the people of his country.

After about five hours of traveling on narrow bumpy roads, we passed through the bustling town of Sawai Madhopu. A large truck was broken down on a critical roadway so there was another brief delay.

After much posturing, honking, and gesturing, our driver made it to our hotel. We arrived at 1:00 in time for lunch. Some of the rooms were not ready so we ate and then found our room by 2:15.

Built in the style of a 16th-century-type fortress, Nahargarh is built like a traditional Rajput hunting palace complete with a formal Mughal garden. Sujay told us our rooms were going to be nice, but he failed to tell us we had the dream palace of a lifetime.

The hotel is very close to the Ranthambore National Park, a site of Project Tiger, India’s national tiger conservation program. With more than 100 acres of forest and lakes, the park protects less than 60 Bengal tigers.

As soon as we had settled in, started our computers and logged on to the Internet, we got the laundry ready to take to the lobby. Today is about half way through the trip and our desert clothes were a tad bit pungent.

Sujay had arranged for an optional tour to the Ranthambore Fort at 3:10. Just finding our way back to the lobby of the hotel was a challenge; this hotel is so huge and so opulent.

We rode on an army green safari truck (canter) as far as we could to the fortress and then hiked the remainder of the way. Keeping our eyes out for tigers, we knew we might not be able to see them, but they certainly had their eyes on us.

There were many spotted deer, quail, peacocks, sambar deer, parakeets, and langoo monkeys by the hundreds. This drive into the park was to get to our hike to the fort so we did not linger too long for photos. Tomorrow we will go back with the purpose for seeing more animals.

The fort built more than 1,000 years ago is now included within the park. The ancient fort and all of the land of the park was once a hunting lodge of the maharajas of the area. The hike was relatively easy; about 250 steps but there were so many stops for photos, that it was not a rigorous trek.

At the top we visited a Hindu Temple and were blessed by the priests. Again there were many families who were so willing to stop and talk to us and of course, more photos. We are feeling like Rock Stars!

As the sun was setting we made our way back down the mountain to our awaiting safari truck. We got back to the hotel with enough time for a quick shower and then saw a documentary about the Bengal tigers in the National Park.

Tonight’s dinner was a BBQ out on the lawn in one of the courtyards. A hot buffet was also served with the standard dessert, vanilla ice cream.

We hustled back to our room to finish up the journal and prepare for the early morning safari drive through the National Park. The wake up call will be at 5:30 to see the majestic Bengal Tigers.

“Mighty tigers hear them roar, for they may be no more.” Save the Tigers, World Tiger Day

Loving every day of this joiurnal. Thank you!

I remember this wonderful lodging and the hike up to the fort. We really tried to protect our cameras, etc. from the monkeys as they can be quick to grab things. I hope you are luckier than we were to see the tigers. We only saw prints in the sand in the road. 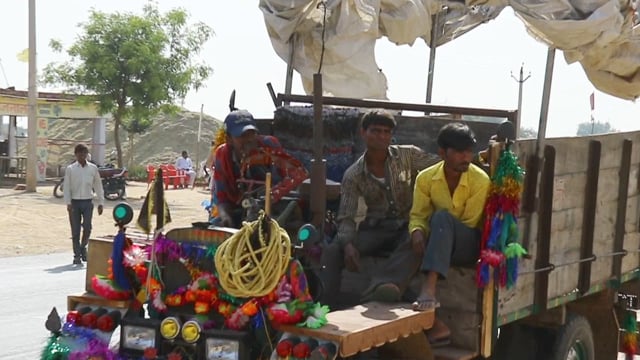