It is Sunday – we must be in Croatia! We woke up at the port of Vukovar. We had a late morning departure so after our breakfast Vic went out to test the weather and take a few early photos. The temperature was 66° and the humidity was 90%.

At 9:45 we went up the gang plank and got on our bus with Masha our local guide and Anton who was our driver for the day. Masha began by telling us that this part of Croatia was heavily bombed during the war and over 90% of the city was destroyed.

For the last 15 years the entire city has had to rebuild homes, commercial buildings, schools, roads, and bridges. Hardest and first destroyed were the city's schools, hospitals, and utilities.

The history from 1991 to 1998 was unbelievable with over 2000 people killed, 5000 people injured, and 1000 people still missing. When the peace was finally negotiated in Dayton, Ohio the community could come back to their city and start to rebuild.

There are still land mines in about 5% of the countryside. In order to comply with the EU agreement, they must all be removed by 2019. Along the road called the “Graveyard of Tanks” we saw Serbian tanks and many homes and other stores that had not been refurbished.

When we got to the city of Osijek, on the banks of the Drava River, we went right to the Fortress built for a possible second invasion by the Turks. The fort is enormous – we walked around the buildings and saw that today there are shops, bars, and nightclubs in the spacious structure.

Our next stop was in Holy Trinity Square to see the statue built in remembrance of the victims of the plague. A university town, many of the huge buildings are dedicated to the many colleges that serve students from Eastern Croatia.

We entered the Church of the Holy Cross, many times called St. Anthony’s. As the patron saint of little children, mothers come to this church from surrounding areas to pray to St. Anthony for the well being of their children.

A young music teacher by the name of Marina gave a concert beginning with a piece played on the church’s huge pipe organ. She then came down to the piano and played and sang selections of typical songs from the Croatian Catholic Mass.

At 12:15 we thanked her for her music. The people on our bus were divided into four groups as we drove to the town of Bilje to attend a lunch hosted by a Croatian family. Ten of us were the guests of Mr. & Mrs. Eftimov who welcomed us with open arms– literally!

Our lunch consisted of a noodle soup, cabbage salad, mashed potatoes, a vegetable dish of zucchini and rice, and meatloaf. For dessert we had an apple torte.

Home made wine and plum brandy flowed freely. Gennie brought them Jolly Rancher candies and Celestial Seasons teas all made in Colorado. By the time we left we had new best friends and we were all able to speak Croatian!

As many times as we have participated in home-hosted dinners or lunches, this one was the most sincere and authentic, and we felt genuinely welcomed to their home.

The time went so quickly, it was already 2:30 and the bus was waiting for us to go back to Vukovar and our boat. When we arrived, we quickly turned in our whisperers and then dropped off our backpacks and went out to walk around the town a little more.

We were able to communicate with several families out for their Sunday strolls and enjoyed the beautiful fall day on the Danube – it was really BLUE today as it reflected the clear skies above.

Back on the boat, we were greeted by Elena, our favorite hostess, with a glass of peach ice tea. We showered, worked on the photos and the journal, and then went to the Port Talk at 6:45.

Our dinner tonight was in the small dining room again. The chef grilled steak and chicken for us and the salads were wonderful. We came back to our room by 8:30 and finished our web work and then watched the boat leave Croatia. We will continue south and be into Serbia by morning.

the devastation must have been horrible - 1000 people still unaccounted for - WOW. GREAT pic of y'all. How do y'all stay so young? Must be traveling, huh? The Danube River looks different in different parts - incredible!!! Keep the picws coming!!

Looks like you are having a great time. I so admire your ability to get out and connect with local families. That gives an added dimension to your travels. You guys would make great ambassadors! Have a great day and stay safe.

What a nice day. It makes the long war very real; who is responsible for removing the land mines? 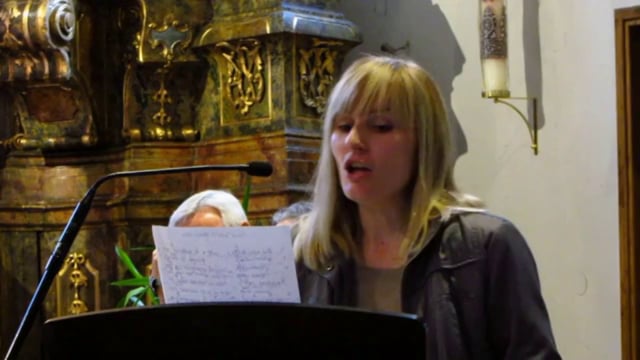 Concert by Marina, Church of the Holy Cross (1:57)

Concert by Marina, Church of the Holy Cross