We had an early departure this morning at 8:30 for a day long optional excursion to the city of Delft. Gerald, our driver helped everyone cross the street to where he had parked our bus.

There were high gray clouds but we did see an occasional patch of blue. The temperature was 52 degrees and the humidity was 86%.

Only three quarters of our group elected to join this day trip leaving plenty of extra seats on the bus. Thomas gave us a preview of the day and more information at the stop at Aalsmeer for a look at the International Dutch flower auction, FloraHolland.

By the time we arrived at the flower market most of the auction purchases were completed. We did get to see the movement of the electronic flower carts and sorting of the masses of flowers ready to be trucked to retailers all over Europe.

At 10:15 we left Aalsmeer and continued on to Delft. Thomas gave us some of the history of the Dutch Traders, the reclamation of the land, and the importance of William of Orange.

On both sides of the highway we could see the flat, flat green fields with ditches bringing and taking water from the sea. There were many greenhouses and several of the old style windmills as well as the modern wind turbines.

Our first stop was at The Candelear Delft Shop where our guide Stephen, a fourth-generation potter talked to us. He has worked as a master craftsman for 30 years. He demonstrated the process of making the traditional blue glazed ceramic masterpieces.

Since the 1600's, Royal Delft has been the most famous ceramic factory. Stephen stressed the importance of trademarks to insure genuine pieces of quality. He also told us about the 21% Value Added Tax. Not many people made purchases!

After a brief look at the shop, we walked to the castle where William of Orange was assassinated in 1584. We walked to the Oude Kerk, or Old Church built in 1260 and completed 100 years later.

Back to the Main Square, we saw the City Hall (1618) and the New Church, built between 1614 and 1622. This is the site of the burial tombs of William of Orange and successive members of the Dutch Royal Family. We climbed the 376 steps up the narrow spiral stairs to the top of the 108.75 meter Royal Monument Tower.

It was terribly windy but worth the climb for the panoramic view of the city of Delft and the sea in the horizon. The climb down was much more difficult. We visited the main body of the church and then left for a quick sandwich on the square.

After getting a few more Euros at an ATM we visited the Cheese and More Store. We were offered many samples of the delicious cheeses made from the milk of the contented cows and goats of The Netherlands.

The group gathered at 2:30 and we were back on the bus for a short ride to The Hague to see the International Peace Palace housing the International Court of Justice. Thomas made sure that those of us who chose to get out of the bus were safe as we had to cross a tram line, bicycle path, and busy intersection.

We were really looking forward to this portion of our itinerary because of our readings and Vic's studies of the significance of the World Peace Organization founded here before World War I and funded by the Carnegie Foundation. An eternal flame for world peace burns in the garden and the bright blue United Nations flag waves high over the palace.

Gerald made one additional quick stop at Scheveningen Beach. It was way too cold for a dip but we braved the wind of the North Sea. Back on the bus, we drove into Amsterdam arriving at our hotel at 5:35.

We had just enough time to check our mail, finish the journal, sort photos, and start packing for our departure tomorrow morning.

Thomas had rearranged our itinerary for us scheduling the Optional Canal Dinner Cruise for this evening. We left the hotel at 7:30 and enjoyed dinner on a house boat.

I don't see the United Nations flag over the International Peace Palace.

That video is crazy - lots of flower commerce going on down below. 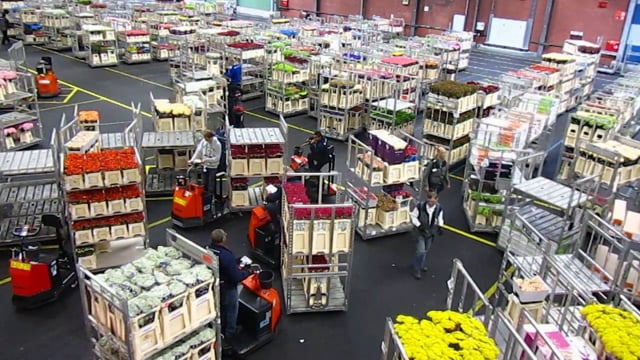 View from the top of the Royal Monum...

View from the top of the Royal Monument Tower

View from the top of the Royal Monument Tower