Today was a travel day! We packed up our bags and had them out at 6:45. Eddie and Samy loaded all of the luggage on the top of our van and wrapped them in waterproof tarps. It is heavy work that takes much time and effort on the part of the driver and tour director.

After breakfast we left right on time at 8:00. There were a few clouds in the sky, but the air was cool after last night’s rain.

Women do not change their names after marriage. Gennie would always be formally Genevieve Luhring (Massey) and Vic would be Victor Garcia (Rehder). Our son would be named Eduardo Garcia (Luhring) as his official name, but Eduardo Garcia is what he would be called.

We made a brief stop in the town of Fortuna to get money from the ATM, some people wanted to buy maps, and there was also a grocery store for those who wanted snacks. From this location we could see half of the cone of the Arenal Volcano.

When we visited Costa Rica in the past, the volcano has been covered with clouds. The mountain generates its own weather and the steam continues to seep from the side of the cone.

The last major eruptions were in 1968 and then again in 1974. Exclusive resorts and expensive homes still remain within the safety perimeter. Even with an emergency alert system, it is predicted that people would have only 12 minutes to evacuate.

Our destination for the morning was Arenal Lake. At 10:30 we were at the lake and in just a few minutes we were given life jackets, paddles, and assigned a kayak. We thoroughly enjoyed our hour gliding through the crystal clear water with such a gorgeous background.

There was a very clean restaurant to change out of our damp clothes and then we were back in the bus. It was only a few minutes to the El Establo Arenal Restaurant where we had a wonderful lunch of several kinds of vegetables and the standard beans and rice.

The owner, Alex and his family have built their establishment around an equestrian theme. Alex is a “Horse Whisperer” and he gave a demonstration of his dancing horse. Relic, a Costa Rican Paso, has won many major competitions and is a favorite in local parades.

Out in the corral area, a young cowboy was practicing his rope tricks. We had a wonderful time with this family and by the end of our visit it was if we were all relatives.

After saying goodbye, Samy negotiated the bus up steep winding roads. The scenery was more and more beautiful around each bend in the narrow highway.

We were able to stop for a panoramic view of the volcano and surrounding country. Crossing the Continental Divide again, we were now on the Pacific side of Costa Rica.

As we continued on to Monteverde, the last 34 KM was unpaved road. This gave Eddie a perfect opportunity to tell of one of Costa Rica’s darkest scandals. Several presidents in the 1990's and even until 2004 embezzled over 200 million dollars in road funds.

When we arrived at the El Establo Mountain Resort, we listened to a presentation by Martha Campbell, one of the daughters of an original Quaker family that settled this area in 1951 to avoid the Peacetime Draft in the United States.

Martha took us back to the early days of the settlement with a slide show and a talk about her childhood and the work her community did to establish the Cloud Forest Biological Reserve.

We had a gourmet dinner in the restaurant and then came back to our room to begin writing the journal and going through the photos of our long but action-packed day.

To receive $50 per person off your first reservation with OAT, mention the following information when reserving your Overseas Adventure Travel Trip: Mr. Victor Garcia Customer #673062

We loved the kayaking also - and stayed in the same hotel! Beautiful! 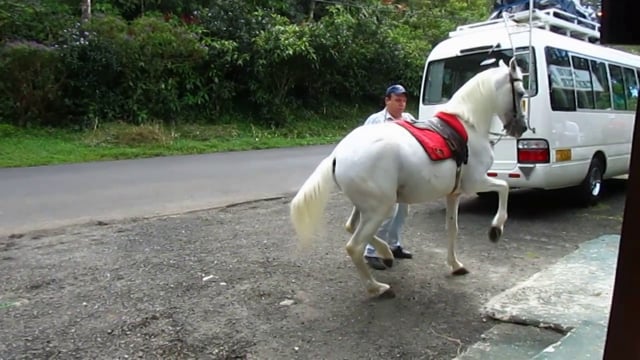