Back Roads Of Iberia: Spanish Paradores and Portuguese Pousadas Day 3

Rikardo had warned us that today was to be rainy and cold and he was right! The temperature was 50 degrees and it was 100% humidity with light rain.

We had a nourishing breakfast and then joined our group at 8:30 for a full day's adventure in Lisbon. We met our city guide, Paula who helped us to get to know her home city. Armed with raincoats, umbrellas, and light jackets, we were prepared for whatever the day would bring.

Tiago was our driver for the mid-size 35-passenger bus. Because it was Sunday there was not much traffic but there were several charity races today so many of the streets were blocked off for the runners.

Paula started our tour talking about the demographics of the country and the population of Lisbon that is over 3 million people. Many of the streets are still cobblestone to preserve the character of the old city and also to control the speed of the traffic.

The city became the capital in 1255 and was one of the richest cities in the world. The center of maritime culture, Lisbon was instrumental in providing navigators for the Age of Discovery.

The capital was built on seven hills with many trams, elevators, and funiculars linking the upper and lower areas of the city. All of the narrow streets led down to the Tagus River, the focus of world traders and sailing vessels at the harbor.

After the devastating earthquake and tsunami of 1755 the city was rebuilt with wide streets and anti-seismic architecture for safety. The buildings are relatively plain but most have wrought iron balconies and the famous decorative tiles.

We left the bus and headed toward the Moorish Fort, or the Castle of San Jorge. We could see the gates of the old city. After the Christian conquest of the Moors, the first large cathedral, Santa Maria Maior de Lisboa was established. We walked though the Alfama District, an old Moorish neighborhood that survived the Middle Ages and the earthquake.

The city is divided into neighborhoods, each famous for their own unique parks, homes, cafés, and specialty shops. On this rainy Sunday morning most of the shops were closed and the locals were sheltered from the rain. Only crazy tourists were out today.

We made another stop at Belém, a neighborhood famous for the Belém Tower, the UNESCO World Heritage Site dating from the early 15th century. We also saw the 1960 Monument to the Discoveries dedicated to Henry the Navigator and many other famous Portuguese explorers.

We visited the Monastery of St. Jerome and saw the tomb of Vasco da Gama who circumnavigated Africa and sailed to India. The Belém neighborhood was very exclusive with streets lined with jacaranda trees, imported from Brazil.

After our tour of the church we went to the Monastery coffee shop. Rikardo arranged a special treat of the world renowned Pastéis de Belém, a light pastry with a custard filling eaten with powdered sugar and cinnamon. Made with a secret recipe from the monks; the pastry was delicious. The shop dates back to 1837 and now includes a gift shop.

At 12:30 we met Tiago and got back on the bus and drove a short distance to visit the small hill top village of Sintra. A retreat for the royal family and wealthy of Lisbon, the micro-climate is always cooler in the summer. Sintra was known as a second home of the rich and famous.

We had free time to explore and get a bite to eat. We shared a sandwich at a small bakery called Piriquita II for lunch. The steady rain did not deter us, we walked and window-shopped, looking at the many tourist havens.

The group gathered again at 2:30 at the Information Office. Tiago picked us up for a short drive that serpentined up the mountain to the Pena Palace and gardens. The estate was built in a lush green forest of moss covered trees, ferns, ivy, rock gardens, and small ponds.

The guidebooks say that on a clear day one can see the Targus River and all the way to the Atlantic Ocean. We could not even see the top of the castle spires!

A true rain forest day, the fog and rain, dripping off of the lush vegetation gave an eerie feel to the whole experience. Rikardo told us that because of the adverse weather conditions the gardens were closed and we would not be able to do that portion of the tour.

While Paula and Rikardo went to buy the tickets for the park, Gennie caught up on the journal. Even though the rain continued, many people were braving the weather. The umbrella vendors and shopkeepers selling rain ponchos were doing a healthy business.

The Pena Palace was an extremely well preserved UNESCO World Heritage Site from the 19th-century. King Consort Fernando II built his “summer” castle on the same site as an ancient monastery. Rooms surrounding the cloister were furnished with the original personal possessions of the family.

Instead of visiting the gardens, Rikardo extended our visit inside to the palace, a smart plan as the drizzle became a steady downpour. We left the palace at 4:30 and took the small shuttle back to the entrance where the bus was waiting for us.

Paula said goodbye to us at the train station in Sintra and went back to her family in Lisbon. We continued into the village for another Learning and Discovery.

The bus stopped so Rikardo could go to a small shop to purchase cherry liquor served in a chocolate cup called ginjinha for each of us. While he was gone Gennie found that the whole city of Sintra was a "Connected City" with a free open WiFi system.

We walked up to the top of the city to the Páteo do Garrett restaurant and enjoyed a dinner of hake, (a mild grilled fish), boiled vegetables, and potatoes. After our dinner two guitarists Luis Ribeiro and Jaime Martins and the singer Fernanda Santos entertained us with Fado, Portugal's love stories put to music.

With an impelling voice, Fernanda sang of love and loss as the guitarists played Portuguese and classical guitars in the traditional style. Fado can be described as a love song with a nostalgic theme.

Today was dedicated to seeing the Lisbon waterfront, learning more about the navigators from Portugal, and realizing the early impact of these discoveries on the world. Even more research finds that:

Portugal was the world’s first maritime power and birthplace to some of the world's first seafaring explorers. Ferdinand Magellan, Vasco de Gama, Bartholomew Diaz, and Pedro Álvares Cabral and others discovered new lands, including Brazil, parts of Africa and the Far East and claimed them for Portugal.

Hope you are bringing some of the cherry liquor and chocolate cups back for Friday morning coffee! Have fun and stay dry. 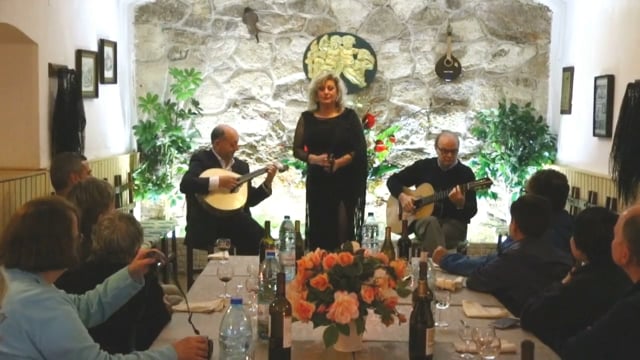 Gold From Brazil in Monastery of St....

Gold From Brazil in Monastery of St. Jerome

Gold From Brazil in Monastery of St. Jerome